INFORM | SAVINGS AND THE SILLY SEASON

NOVEMBER 2015
BROUGHT TO YOU BY FINANCIAL MATTERS 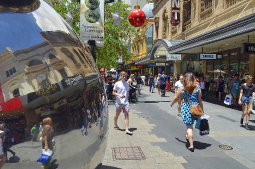 SAVINGS AND THE SILLY SEASON

Don’t let the Christmas holidays undo your great work throughout the year. Be aware of spending patterns to turn silly season into savings season.

Last Christmas, a CommBank research study1 said, Australians would spend $17.8 billion in five weeks from December 1, 2014 to January 6, 2015. Unsurprisingly, the spending would be mostly on gifting and holidays, but other major expenses included Boxing Day sales and entertaining friends and family.

During those five weeks, the study revealed, Australians were forecast to spend an extra $1079 each, with 3.2 million consumers hitting the shops on December 13 alone. Of the extra spending, $7.6 billion would go on gifting and another $4.6 billion on partying. But it didn’t all end at Christmas – another $2.6 billion would be spent during Boxing Day Sales!

So if you ever should be planning your finances, it is now, to ensure Christmas does not take away from the great financial work that has been done throughout the year. But how do we prepare for silly season without taking the fun out of it?

The first step is to make yourself familiar with your upcoming expenses. This means budgeting. Where are your expenses going to be and what can you afford to allocate to each? How can you reduce the upcoming costs and which of them are ‘needs’ as opposed to ‘wants’? What types of bolt-on expenses come with the main ones – buying meals or catching taxis during a big shopping day or while away on holidays etc.

Set realistic and attainable budgets then formulate a plan to achieve them. Be creative in your gifting – use price comparison sites and points from rewards programs, for instance. In order to balance out your spending, figure out which of your usual expenses you can go   without. If you usually go out to dinner once a week, consider giving this a miss as you’ll likely be attending several festive dinners, for example. And do you really need to attend the Boxing Day sales this year? Are those purchases absolutely necessary?

Then put a plan   in place to record your spending – there  are several apps that do just that. It’s no use setting a budget if you can’t measure your performance against it.

Rather than thinking of the holiday moments such as the handing over of gifts or the nights in expensive resorts, instead focus on the end goal for your wealth plan, the lifestyle and freedom that financial discipline will offer. It is this that will secure your enjoyment of the Christmas period and ensure you don’t spend January wondering where the money went.

Make an appointment with an adviser today